Rosa Parks was a civil rights activist best known for her role in the Montgomery bus boycott in Alabama. She refused to give up her bus seat to a white person and was arrested. During this time, she became a powerful symbol of resistance to racial segregation.

Below are 27 inspirational Rosa Parks quotes to fire you up:

1. “Each person must live their life as a model for others.” – Rosa Parks

2. “It is better to teach or live equality and love … than to have hatred and prejudice.” – Rosa Parks

3. “During the Montgomery bus boycott, we came together and remained unified for 381 days. It has never been done again. The Montgomery boycott became the model for human rights throughout the world.” – Rosa Parks

4. “Our freedom is threatened every time one of our young people is killed by another child… every time a person gets stopped and beaten by the police because of the color of their skin.” – Rosa Parks

5. “Stand for something or you will fall for anything. Today’s mighty oak is yesterday’s nut that held its ground.” – Rosa Parks

6. “People always say that I didn’t give up my seat because I was tired, but that isn’t true. I was not tired physically … No, the only tired I was, was tired of giving in.” – Rosa Parks

7. “I would like to be remembered as a person who wanted to be free … so other people would be also free.”

8. “Each person must live their life as a model for others.” – Rosa Parks

9. “Racism is still with us. But it is up to us to prepare our children for what they have to meet, and, hopefully, we shall overcome.” – Rosa Parks

10. “I believe we are here on the planet Earth to live, grow up and do what we can to make this world a better place for all people to enjoy freedom.” – Rosa Parks 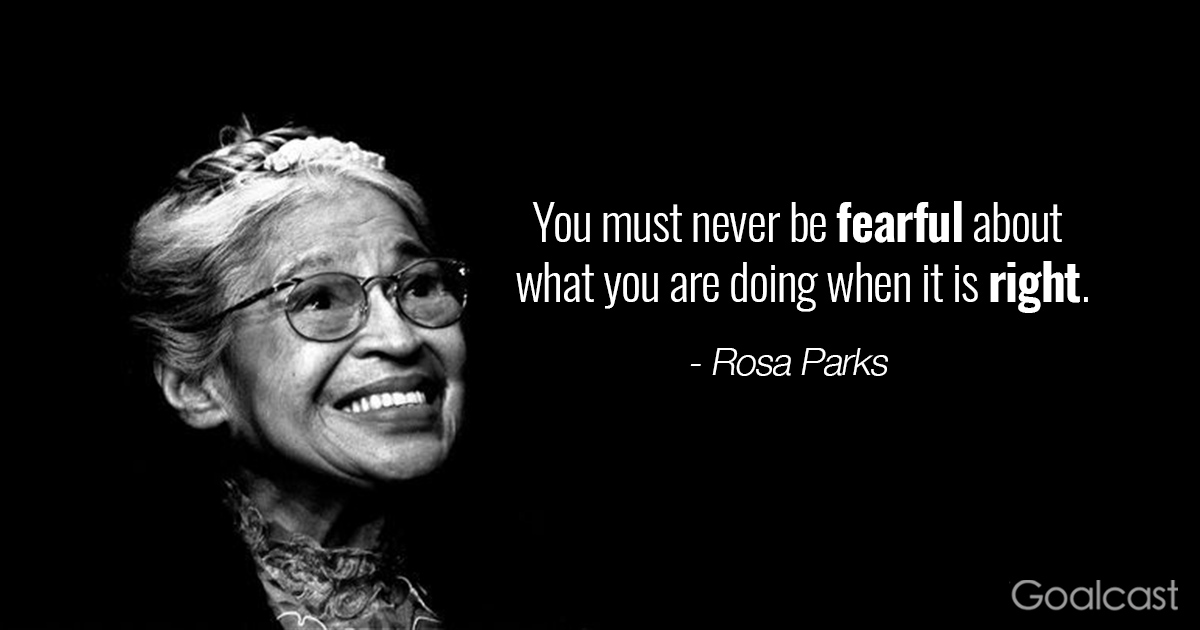 12. “There were times when it would have been easy to fall apart or to go in the opposite direction, but somehow I felt that if I took one more step, someone would come along to join me.” – Rosa Parks

13. “Life is to be lived to its fullest so that death is just another chapter. Memories of our lives, of our works and our deeds will continue in others.” – Rosa Parks

15. “Memories of our lives, of our works and our deeds will continue in others.” – Rosa Parks

17. “I’m tired of being treated like a second-class citizen.” – Rosa Parks

19. “The bus was among the first ways I realized there was a black world and a white world.” – Rosa Parks

20. “There is no future without education.” – Rosa Parks

21. “To bring about change, you must not be afraid to take the first step.” – Rosa Parks

22. “Whatever my individual desires were to be free, I was not alone. There were many others who felt the same way.” – Rosa Parks

23. “I have learned over the years that when one’s mind is made up, this diminishes fear; knowing what must be done does away with fear.” – Rosa Parks

24. “God has always given me the strength to say what is right.” – Rosa Parks

25. “You spend your whole lifetime in your occupation, actually making life clever, easy and convenient for white people. But when you have to get transportation home, you are denied an equal accommodation. Our existence was for the white man’s comfort and well-being; we had to accept being deprived of just being human.” – Rosa Parks

26. “At the time I was arrested I had no idea it would turn into this. It was just a day like any other day. The only thing that made it significant was that the masses of the people joined in.” – Rosa Parks

27. “The Rosa and Raymond Parks Institute accepts people of any race. We don’t discriminate against anyone. We teach people to reach their highest potential. I set examples by the way I lead my life.” – Rosa Parks

Which Rosa Parks quote is your favorite and why? Comment below!

Brené Brown is a professor at the University of Houston Graduate College of Social Work. Her research focuses on shame, vulnerability, and leadership. It wasn’t until 2010 that she came into the spotlight by having a viral TED talk, titled ‘The Power of Vulnerability.’ She’s also the author of six New York Times Bestselling books. END_OF_DOCUMENT_TOKEN_TO_BE_REPLACED

Brendan Fraser is an actor known for starring in The Mummy trilogy. He got his start in acting during the 1990’s with movies such as George of The Jungle and Airheads. END_OF_DOCUMENT_TOKEN_TO_BE_REPLACED

Stephen Curry is considered one of the best basketball players along with being a member of the Golden State Warriors. He’s one three NBA championships, won the NBA’s Most Valuable Player award, and is currently the highest paid player. END_OF_DOCUMENT_TOKEN_TO_BE_REPLACED Kylian Mbappé is a French professional footballer who plays forward for Paris Saint-Germain, and is considered one of the best players in the world. Mbappé helped France win the 2018 FIFA World Cup along with winning the Best Young Player Award during the World Cup. END_OF_DOCUMENT_TOKEN_TO_BE_REPLACED