Diego Armando Maradona was an Argentine football player who’s considered to be one of the best players to ever play the game. He’s a joint winner of the FIFA Player of the Century.

Check out these motivational Diego Maradona quotes on life and success!

1. “My mother thinks I am the best. And I was raised to always believe what my mother tells me.” – Diego Maradona

2. “If you don’t want to play clean football, then go up into the stands.” – Diego Maradona

3. “He feels the ball and that is the difference from the rest.” – Diego Maradona

5. “While the coach is entitled to celebrate the team’s victories, there is a manner and a way of doing so without aggravating the opponent.” – Diego Maradona

6. “I have seen the player who will inherit my place in Argentine football and his name is Messi. Messi is a genius.” – Diego Maradona

7. “Something that just came out of me. It was a bit of mischief.” – Diego Maradona

9. “I certainly have an advantage over some, because I can pass on so much from the World Cups I played in.” – Diego Maradona

10. “The problem is that they are all stars at Madrid. You need someone to carry the water to the well.” – Diego Maradona

11. “Money is not a motivating factor. I do what comes to me at that moment.” – Diego Maradona

12. “To see my country lose a football match is very hard for someone who has worn the shirt.” – Diego Maradona

15. “The Lord helps those who help themselves.” – Diego Maradona

16. “When you win, you don’t get carried away. But if you go step by step, with confidence, you can go far.” – Diego Maradona

17. “I’ve come to add something and not to take away anyone’s position.” – Diego Maradona

18. “You can say a lot of things about me, but you can never say I don’t take risks.” – Diego Maradona

19. “To see the ball, to run after it, makes me the happiest man in the world.” – Diego Maradona

20. “When people succeed, it is because of hard work. Luck has nothing to do with success.” – Diego Maradona

21. “I was, I am and I always will be a drug addict. A person who gets involved in drugs has to fight it everyday.”- Diego Maradona

22. “All the people that criticized me should eat their words.”- Diego Maradona

23. “Everybody in Argentina can remember the hand of God in the England match in the 1986 World Cup. Now, in my country, the hand of God has brought us an Argentinian pope.” – Diego Maradona

24. “There would be no debate about who was the best footballer the world had ever seen – me or Pele. Everyone would say me.” – Diego Maradona

25. “God makes me play well. That is why I always make the sign of the cross when I walk out onto the field. I feel I would be betraying Him if I didn’t.” – Diego Maradona 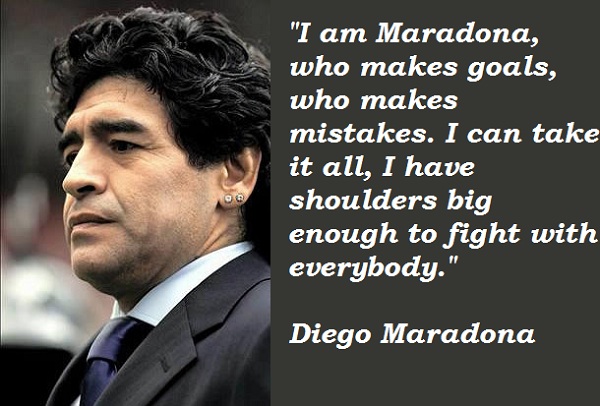 28. “Messi I think is like me, he is the best in the world along with Ronaldinho.” – Diego Maradona

30. “What I love most about Norway is you ladies. Back home I’m used to fat and hairy women journalists.” – Diego Maradona

31. “The problem is that they are all stars at Madrid. You need someone to carry the water to the well.” – Diego Maradona

32. “If I could apologize and go back and change history I would. But the goal is still a goal, Argentina became world champions and I was the best player in the world.” – Diego Maradona

Which Diego Maradona quote is your favorite and why? Comment below!

40 of Freddie Mercury’s Most Inspirational Quotes

Rosa Parks was a civil rights activist best known for her role in the Montgomery bus boycott in Alabama. She refused to give up her bus seat to a white person and was arrested. During this time, she became a powerful symbol of resistance to racial segregation.
END_OF_DOCUMENT_TOKEN_TO_BE_REPLACED

Brené Brown is a professor at the University of Houston Graduate College of Social Work. Her research focuses on shame, vulnerability, and leadership. It wasn’t until 2010 that she came into the spotlight by having a viral TED talk, titled ‘The Power of Vulnerability.’ She’s also the author of six New York Times Bestselling books. END_OF_DOCUMENT_TOKEN_TO_BE_REPLACED

Brendan Fraser is an actor known for starring in The Mummy trilogy. He got his start in acting during the 1990’s with movies such as George of The Jungle and Airheads. END_OF_DOCUMENT_TOKEN_TO_BE_REPLACED

Stephen Curry is considered one of the best basketball players along with being a member of the Golden State Warriors. He’s one three NBA championships, won the NBA’s Most Valuable Player award, and is currently the highest paid player. END_OF_DOCUMENT_TOKEN_TO_BE_REPLACED